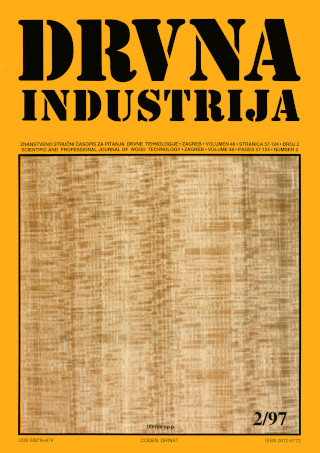 SEM study of the weathering effects on painted wood

For the purpose of evaluating the performance and durability of modern wood coatings with low organic solvent content, natural and artificial exposure trials of various specimens were performed and subsequently the conditions of the coating, of the substrate and of their link was assessed by scanning electron microscopy (SEM). Two types of European softwood species were used as a substrate, namely pine and spruce, and they were used either as coated panels or as microtomed wood sections ('thin strips'), which were exposed behind a detached film of a coating. Solvent borne (sb) coatings were compared with modern water-borne (wb) coatings. Semitransparent stains were compared with opaque white paints. Pine and spruce did not show significant differences in their failure modes, film-holding properties or UV light resistance under semi-transparent coatings. However, spruce was shown to undergo somewhat smaller structural changes with weathering. The paints did not penetrate the cell wall but firmly adhered to the S3 layer of the lumina. The solvent-borne coatings (both paint and stain) penetrated deeper into the wood surface than the water-borne coatings. The opaque paints fully protect the wood from the effect of light through a 14-month period of natural exposure and maintain the coherent protective coating. The water-borne paint exhibits more brittle characteristics on the fractured transverse surface than the solvent-borne paint. The stains vary in their protective effectiveness. The thick water-borne stain shows a tough, sound failure mode, good adhesion but very poor penetration into wood surface. The thin coating of the solvent-borne stain is degraded by light, and the interface with the wood is affected, resulting in the development of brittleness of both wood and coating and leading to adhesion failures preceding the detachment of the film. Thin strips with detached films of coatings realistically represent the surface of coated wood specimens, and are easy to handle, to detach and subsequently to investigate both mechanically and microscopically. The combination of strength measurements and the microscopic evidence proved particularly effective for the interpretation of the changes occurring at the very surface of wood components i.e. at the wood-coating interface. The microscopic observations confirmed that the progress of wood photodegradation can be successfully detected by the combination of the state of deterioration of anatomical elements on radial surfaces and by fractographic evidence on cross sections.