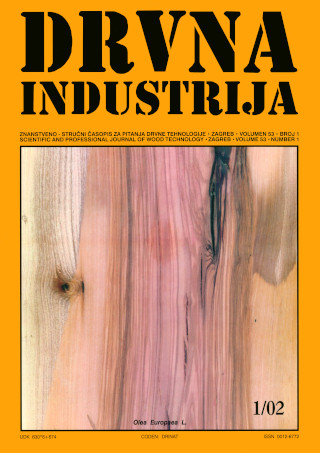 Influence of carbon fibers on some relevant properties of veneer plywood

The problem of the lack of quality raw material for producing veneer boards is attemped to be solved with the use of lower quality raw material or with the use of the wood species with lower mechanical properties. It is necessary to minimise the negative properties of such wood raw material so that the veneer boards can retain the required mechanical properties. On the other hand, apart from the quality of the used raw material, there is significant difference between mechanical properties in parallel and perpendicular direction in veneer boards with lower number of layers. One of the methods to achieve the improvement is to produce combined veneer boards from two diffenent materials, one made of wood and the other made of nonwood material used as a reinforcer. For this purpose, five-layer poplar veneer boards with and without a reinforcer were made. Double directed carbon fibres were used as a reinforcer, impregnated with resorcine phenol formaldehyde adhesive. The results achieved during testing showed a significant increase in bending and tensile strength parallel to the grain. The increase was even more significant perpendicular to the grain which contributed to a harmonization of the required properties in direction of the length and the width of the boards. Using the FE method, the analysis of the veneer boards model showed that carbon fibres caused significant stress release in veneer. As a result, deformations of the material were decreased, which shows favourable effect of carbon fibres on the construction of reinforced veneer plywood.