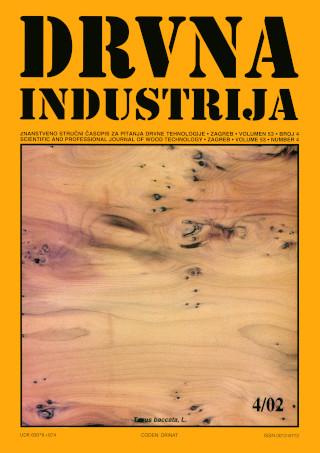 Axial swelling and shrinking of wood is affected, among other influences, by the microfibril angle which is, as indicated in the literature, the greatest in the youngest, juvenile wood. The microfibril angle decreases with the age of a tree, and reaches the lowest values in the adult, mature wood. Since axial shrinking and swelling correlates positively with the age of wood, the combining of wood of different age in gluing of laminated parts may cause longitudinal bowing and warping of elements. An example may be found in window production. The deformations are expected to be larger with the greater differences in the age of lamellae that are glued together. The investigation of the effect of the different age of lamellae on dimensional stability of laminated elements was performed on spruce pieces (Picea abies Karst.) that were symmetrically glued using PVA adhesive. Each element consisted of two lamellae of the wood of same age or of different ages of juvenile wood (5, 15 or 25 years) or adult wood (40 years). After gluing the elements were conditioned in normal (ϕ=65%, t=22,5o C), humid (ϕ=90-92%, t=22,5o C) or dry climate (ϕ=33-34%, t=20o C. Bowing during changes in climate conditions was measured by a laser device and determined as a height of the arch chord of the concave or convex deformation. The influence of the different age of lamellae on dimensional stability of the element was established. The dependence of the deformations on the age of lamellae was mostly unpredictable and could not be clearly distinghished between the elements of smaller and those of greater age differences. Characteristic great variability was consistent for all the results of measurements.