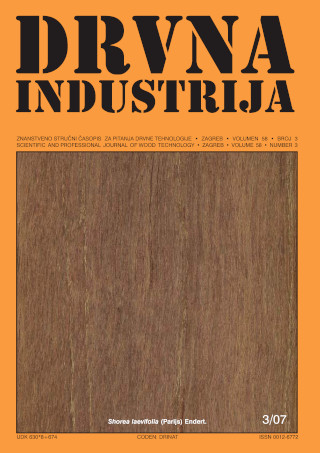 This paper analyses individual stress components that appear in plywood panels subjected to tensile load. The analysis was conducted on a seven-layer beech plywood panel, 10.52mmin thickness. Tensile load was applied on the plywood panel according to the guidelines of the European Norm HRN EN 789. Measurement results obtained by empirical measurement methods were used as the basis for developing a simulation model using the finite elements method (FEM). The study results show that there are substantial differences in the distribution of stress between the parallel- and perpendicular-oriented veneer layers. In parallel layers, the highest values of the s vm (Von Mises) stress were distributed along the narrow or central region of the test piece, which also represents the desired stress distribution. Contrary to this, in perpendicular layers, the stress distribution is concentrated at the transition between the narrow and wider areas, which indicates the presence of a significant problem in determining the tensile properties of plywood panels. The study results also indicate that the shear component t xy accounts for a significant share of the total stress and that its influence on the overall stress is significantly more pronounced in perpendicular layers. The values of the remaining two shear components t xz and t yz are virtually negligible, which is reasonable considering that the numerical model was subjected to in-plane load.