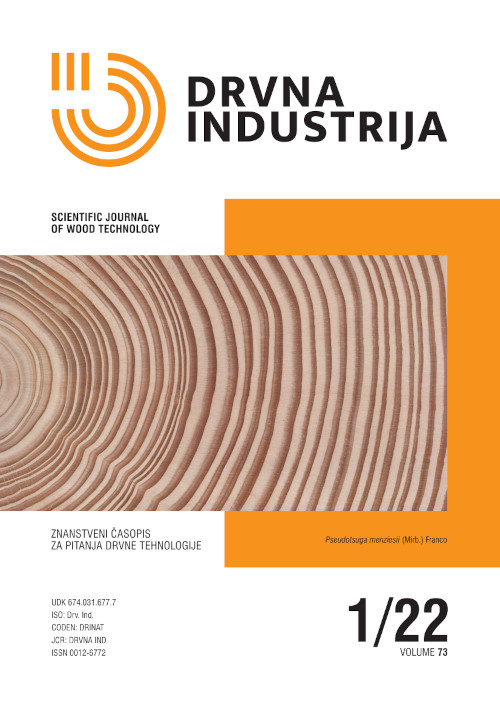 This study was conducted to investigate the effect of acetylation on equilibrium moisture content (EMC) of Nigerian-grown rubberwood and its effect on colour change in exposure of rubberwood to surface degradation through accelerated weathering. The samples were modified to two levels of acetylation, which yielded weight percent gain (WPG) of 7 % and 10 % after 8hr (8-hr Acetyl) and 48hr of acetylation (48-hr Acetyl), respectively. Accelerated weathering of unmodified (Ref) and acetylated wood was done using QUV-Accelerated Weathering Tester for four weeks. The unmodified and acetylated samples (weathered and unweathered) were oven-dried and conditioned in climate rooms at different relative humidity of 50 %, 65 % and 95 %, with samples being moved to each room after 14 days. Results showed that acetylation led to a significant decrease in equilibrium moisture content of rubberwood. After weathering, there was a decrease in EMC of rubberwood due to removal of hemicelluloses alongside the degraded lignin, and a slight increase in EMC of the acetylated wood. In terms of colour change, photo-bleaching of the acetylated samples was higher (10.46 for 48-hr Acetyl) after four weeks of weathering compared to the unmodified samples (6.43). Hence, the outcome of this study has shown that, although acetylation is effective in minimizing moisture ingress into wood, it resulted in photo-bleaching of the weathered samples. Additional surface coating is recommended to serve as a protective layer, preventing partial washing out of the acetyl groups, minimize photo-bleaching during weathering and prolong the aesthetic value of the wood especially in outdoor applications such as wall cladding and façade.